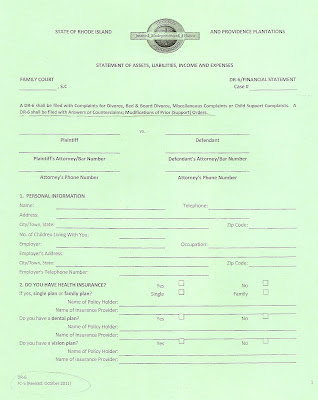 Last week I went to Providence Family Court to observe a hearing in the "Textron Case" (mentioned in my post of March 16, 2012). I learned about another reform of Chief Judge Haiganush Bedrosian -- a new 9-page green version of the old "DR6," the financial form that has been the object of much lawyerly gaming in the past (as the baby shown at the top of this blog discovered in her teens, but that's another story).

No one in the courtroom seemed to have one of these new DR6 forms, but the fact that the Defendant’s attorney knew the form should have been submitted -- and the judge agreed -- suggested that a new wind is blowing.

In the Washington County case that I have been reporting at http://TrophyChild.blogspot.com, "Barbara," the client of Cynthia Gifford and Cherrie Perkins, submitted one incomplete DR6 in four years and failed to include the amounts of her financial resources in that skimpy 2-page document.

Six months ago, Chief Judge Bedrosian promulgated the new rule that requires the green 9-page DR6 to be filed with each Miscellaneous Complaint, Answer, Counterclaim, etc. The color makes it easy to find in the file and hard to fraudulently create without the client's freshly notarized signature.

This strikes me as an important reform. Detailed financial reporting always seemed like a no-brainer that could have avoided hundreds of costly hours wasted in this Court. Chief Bedrosian's reform could seriously crimp the freewheeling style of many Family Court attorneys. It could greatly reduce the number of frivolous motions that now clog the Court.

Another of Chief Bedrosian's reforms makes my work harder, but protects the process against documents mysteriously disappearing or getting hopelessly jumbled in court files. Under this reform, those viewing the file can still copy documents, but may no longer remove the prongs holding them in the file.

It is difficult and expensive to make clear copies of thick files on a photocopier. I could not have figured out the legal abuse in the current TrophyChild case without scanning every document in the public files.

Hopefully Family Court will move toward electronic data, much like the federal courts, which could greatly simplify the filing and retrieval of documents.

I am glad to endure any reforms that mean Family Court is becoming more ethical and just. The three cases I mentioned in this post represent four children--now young women. This month, the youngest (in the Textron Case) turns 12, and the oldest (pictured above) turns 23. I have met them all. Because of them and others like them, I take these reforms personally.

I first opposed Judge Bedrosian at a Judicial Nominating Commission hearing in 1996 because of a decision that she later defended as conforming to the rules. I argued that her decision harmed the child pictured at the top of this blog, a victim of domestic violence. Judge Bedrosian criticized my “ignorance of the requirements of judicial conduct.”

Ironically, her reform of the DR6 hits at the heart of that case and each of the other cases I have mentioned in this post -- the enormous financial inequities that set these three Family Court custody cases on such an unequal playing field. Parents who are forced to litigate pro se, or with pro bono attorneys, seldom prevail for long in this Court.

Their abusers keep returning to assault them again and again. And where will they find the money to appeal to a higher court when decisions harm their children here?

The Court seldom sees these children or how much they suffer. It is good to find Chief Judge Bedrosian addressing problems related to children’s trauma and the bad practices that have prevailed too long in Family Court.

She deserves credit and encouragement to keep working at those parts of this system that are most unjust, including:

1. The abuse of so-called “emergency” motions that
a. are not true emergencies or that
b. should be referred to Superior Court’s domestic violence court (without placing the financial and emotional burden of legal defense on alleged victims).

2. The abuse of ex parte motions that
a. prevent judges from hearing the other side in a timely manner
and
b. produce orders that spread misinformation in the community.

3. The failure of lawyers to complete paper work in a timely manner
a. when drafting orders after hearings,
b. when submitting documents to the other side for review before getting the judge’s signature, or
c. when completing paperwork for child support.

4. The Court’s use of clinicians that violates
a. HIPAA regulations,
b. ethics of mental health professionals, and
c. rules of the insurance industry against reimbursing for court-ordered services.

5. The need for judges to sanction lawyers under Rule 11 of the Federal Rules of Civil Procedure http://www.law.cornell.edu/rules/frcp/rule_11

Family Court needs a roadmap for the countless people struggling to find their way through these labyrinthine rules and procedures that often seem intentionally confusing and inconsistent from one judge to the next. Despite my worst fears, maybe this is exactly the time when we need an experienced teacher in charge.
Posted by Anne Grant at Tuesday, April 10, 2012