Should this Court be saved? 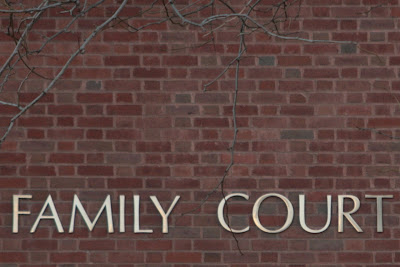 Since the General Assembly created Family Court and Rhode Island taxes pay handsomely for it, how would you recommend our legislators can control its abuses of power?

Examine the case described at http://TrophyChild.blogspot.com (Click on January 15th, 2012, to start at the beginning) and send your confidential suggestions to Anne Grant at
ParentingProject@cox.net
Posted by Anne Grant at Friday, March 23, 2012

The Cabals of Court, Part 2: The Cranston Cabal 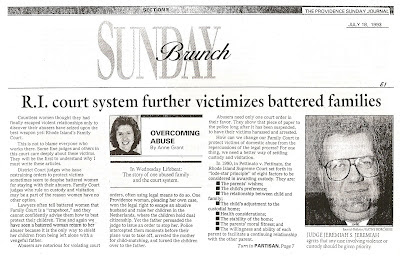 The cavernous marble corridor of Garrahy Courthouse was nearly empty. It was mid-afternoon, and the daily rush had cleared. Attorney William Holt stood, a silhouette against the wall of windows above Dorrance Street.

From the way he stared at me, I suspected he had read my "Overcoming Abuse" column in Sunday's Providence Sunday Journal under an editor's bold headline: R.I. court system further victimizes battered families (July 18, 1993, p. E-1).

Was Holt fuming? Or about to offer me some new disclosure? Both proved true.

Barely able to suppress his rage, he scolded: This is called Family Court, not just because it deals with family issues. But we are family. We attorneys call each other "brother" and "sister." Chief Judge Jeremiah is like a father to us. When he is attacked, we will always come to his defense.

What if your family is dysfunctional? I asked. Can you make changes from the inside, or do you need our help from outside?

He said he had to think about it, which seemed promising.

Bill Holt became the first attorney that our Mothers on Trial support group recognized as a key player in The Cranston Cabal, conceived in the hurly-burly of Cranston City Hall during the years Edward DiPrete was mayor, from 1978 to 1984. Holt had proven his value as DiPrete's administrative assistant during a liquor licensing imbroglio in the early 80s.

Jeremiah S. Jeremiah, Jr., had paid his political dues as Republican chairman in Cranston. He spent fifteen years as assistant city solicitor and six more as solicitor while Edward DiPrete was mayor.

After DiPrete became governor in 1985, Jeremiah advanced to the statehouse as his executive counsel. Two years later, when DiPrete's turn came to fill a vacancy on Family Court (before legislative reforms established the Judicial Nominating Commission), the governor tapped Jeremiah. Barely a year later, in 1987, DiPrete acknowledged Judge Jeremiah as his "closest friend" and made him chief of Family Court.

The Cranston Cabal also produced Kathleen A. Voccola, who became Cranston's first woman city lawyer when DiPrete named her to fill Jeremiah's former position as assistant city solicitor in 1979. Governor DiPrete made Voccola the first woman to serve as the state's liquor control administrator, saying the appointment was in line with his "continuing efforts to place qualified women in positions of authority and responsibility."

Voccola was not the first woman that Republicans invited to serve as sacrificial lamb by running her against popular Attorney General James O'Neil in 1988. She lost that race as expected, but a year later, DiPrete made her a judge on Family Court.

By then an ethics complaint had been lodged against the governor for steering state contracts to campaign contributors. Nearly a decade passed before DiPrete made a plea deal to protect his son from prosecution and went to prison himself for bribery, extortion and racketeering in 1998. The whole truth has never emerged, and DiPrete's friends on Family Court escaped unscathed.

Jeremiah skated away from his own brush with the Ethics Commission. He and Voccola sat on the Governor's Juvenile Justice Commission, where she made, and he seconded, a 1997 motion that awarded $56,000 in federal money to a police organization that sublet space from attorney Holt in Jeremiah's Cranston office building and paid some of that rent directly to Jeremiah.

"Holy mackerel!" Jeremiah exclaimed to the press when his conflict of interest became public. "I never even thought of that."

By the time a grievance against him reached the Commission on Judicial Tenure and Discipline in 1998, Voccola had been named to that body, and the Commission found no basis for the complaint.

In 1999, the Ethics Commission also exonerated Jeremiah, rejecting the recommendation of its own staff, who had urged a full-blown ethics trial and provided 64 pages of findings and exhibits.

Rhode Island has a tradition of powerful families with modest headquarters, like the godfather, himself--Raymond Patriarca's mob headquarters at Coin-O-Matic, 168 Atwells Avenue, Providence. Jeremiah's unpretentious office building at 995 Park Avenue gave no clue to the power he wielded. His tenants, like Holt and attorney Patricia Murray-Rapoza, seemed to gain preferential treatment and prominence at Family Court, where lawyers jockey for rich litigants in custody cases that can provide oodles of billable hours until children turn 18.

Consider the Textron Case, where a wealthy vice president, accused of being a "sexual predator," reached a settlement with help from his attorney, William Holt. Patricia Murray-Rapoza had followed Holt as property manager for Jeremiah and bought the building from him on May 2, 2001. This might have relieved Jeremiah of embarrassing conflicts if he had not agreed to take back the mortgage. The Chief and Murray-Rapoza joked in court about the regularity of her payments to him.

On May 18, 2001, Judge Voccola appointed Murray-Rapoza to be guardian ad litem for two young sisters. One girl turned out to be daughter of the Textron vice president, and Holt launched a custody case against the girl's mother in Family Court and a law suit in Superior Court demanding that she return a diamond ring her boss had given her.

Holt described the woman as a "gold-digger" without appreciating the irony of how that word may fit him as well and other lawyers on the case. At one point, two divorce lawyers became so jealous of the money doled out to Murray-Rapoza that they crafted a document identical to hers and got Judge Gilbert Rocha to sign it, giving each one $5,000 of marital assets and creating three guardians ad litem for two children.

When Chief Judge Jeremiah assigned the case to Judge Rocha, he must have known the judge's daughter, Patricia Rocha, was Textron's attorney, who had worked with Holt on the settlement for his client to leave the company in 2001 by claiming the man was legally blind and therefore entitled to enormous payouts from disability insurance.

And when the insurance company's lawyers arrived in Rhode Island, seeking a transcript relevant to the man's two-million-dollar disability claim, Judge Rocha sent them home without it. They returned a month later with a formal motion to get the public record.

While both Holt and Murray-Rapoza contended the man was legally blind, neither Social Security nor the insurance company agreed. Indeed, the evidence of deceit led U.S. District Court Judge Mary Lisi to deny his bid for U.S. citizenship in 2006 on grounds that he "has not established the statutory prerequisite that he 'has been and still is a person of good moral character'" ("Memorandum and Decision," CA 05-398ML, p. 9).

Since that time, the man has secured U.S. citizenship and will return to Family Court next month. I described this case more fully in August 2010. (In the index below, click on 3. A, B, C, D, E.)

It is time for the General Assembly to examine the exorbitant waste of public funds and the damages done by the cabals of Rhode Island Family Court.
Posted by Anne Grant at Friday, March 16, 2012