In the twenty years I have been advising parents, children, and their legal advisers in several hundred cases in Family Law matters, I have often been asked, “Why is it that children are so often ordered to have contact with, and even into the custody of, parents who have abused them and have perpetrated violence against their partners.”

The answer to this question is not simple and involves an examination of the requirements of Family Laws which stress the importance of children having both parents in their lives after parental separation, the dynamics of legal processes, and the often very clear gender biases of the principals involved in judicial processes.

But one of the most outstanding and consistent features of proceedings involving the care of children post-separation are the conduct and behaviours which can be identified as clearly fitting the definitions of psychopathy/sociopathy.

The major personality traits of the psychopath are supremacy and narcissism. The afflicted individual must be in complete control of their environment and all persons who are a part of that environment or can serve the psychopath’s purposes in maintaining control.

The psychopath is capable of using both aggressive anger and passive anger with cunning and guile, to achieve their goals of exerting control. Examples of such contrary behaviours are the aggressive violence against intimate partners, with the frequent inherent abuse of children, designed to groom friends, relatives, and professionals into believing they are harmless and indeed very stable and friendly. If thwarted in attaining these goals, however, the passive can quickly turn into the aggressive.

In furtherance of these traits, the major tactics and ploys of the psychopath are:

1. denial of wrongdoings in the face of clear evidence;

2. refusal to take responsibility for behaviours and actions;

3. minimisation of the incident and consequences;

4. blame being placed on others;

5. misrepresentation, fabrication, embellishment and distortion of information and evidence;

6. minimisation of all information and evidence regarding wrongdoing;

7. claims of victim status, alleging the victim was the aggressor;

8. projection of their own actions and behaviour onto the victim; e.g. she abuses/neglects the children/ she is an alcoholic or drug abuser. This is based on the belief by the psychopath that attack is the best form of defence.

The grooming of friends, relatives, and professionals is very clear in many cases, and in particular some psychiatrists, psychologists and family evaluators/reporters have been hoodwinked by such tactics and ploys by the psychopathic individual. Their reports, of course favouring the psychopath, have very considerable influence on the Courts and their determinations. Very often clear evidence of intimate partner violence such as convictions, Domestic Violence Orders, Apprehended Violence Orders and Restraining Orders against the psychopathic aggressor and medical evidence of injuries suffered by the adult and child victims are ignored or dismissed as irrelevant by such professionals.

Such professionals now refer to such cases as `high conflict’ cases, when it is clear that they are situations of a violent aggressor/tormentor/persecutor and their victims. It is easy to see how the cases in Austria and America where young girls were imprisoned for many years by controlling individuals and regularly abused in several ways were undetected, when the aggressors/persecutors/tormentors were able to convince their family members, relatives and associates that they were reasonable, normal people. The same often occurs in other cases of violence and murder where neighbours report that the accused murderer is a nice and friendly neighbour. They do not recognise the Jekyll and Hyde aspects of the psychopath’s ploys and tactics and of those they have effectively groomed in their beliefs.

The high conflict which usually occurs in such cases is most commonly engendered by the respective lawyers, conditioned by operating in an adversarial process and arena, whose own major goal is to ‘win’, whatever may be the justness and fairness of the result.

It is not difficult to see, therefore, how the psychopath is able to readily gain the sympathy and support of some of the professionals engaged in the Family Law system and for them to abandon and forfeit their professional objectivity and impartiality in such circumstances. In blaming others the psychopath will allege the former partner is mentally ill and in some cases the former partner may be suffering a Complex Post Traumatic Disorder after suffering years of physical, mental, and sexual abuse and violence. This is often misinterpreted and misdiagnosed as a Borderline Personality Disorder or similar psychiatric term. In effect it is a classic ‘blame the victim’ scenario.

The groomed professionals then enable the psychopath to achieve their primary objective, which is to maintain power and control over their victims, their former partner and children. It is an act of vengeance and spite but mostly it is to maintain the power and control and feelings of supremacism and narcissism. “I am faultless and flawless and in control of my whole environment” are the unvoiced cravings of the psychopath, and “I can continue to inflict my tortures on my victims with impunity” are the psychopath’s continuing behaviours.

The Family Law and their shared parenting provisions and its administration by the Family Courts have become ready enablers for the psychopath.

Charles Pragnell is an Independent Advocate for Children and Families. 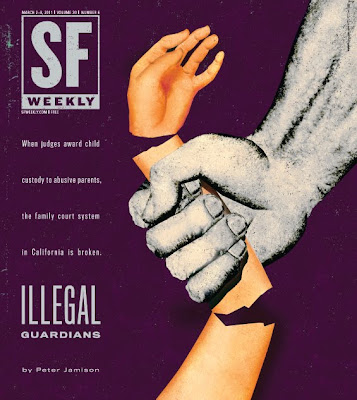 Here is the beginning of an important article by Peter Jamison on March 2, 2011, in the San Francisco Weekly:

After the divorce, Rex was given primary custody of his daughter, as well as the couple's 8-year-old son. Karen says this was because he had a full-time job as a facilities engineer at Santa Clara Valley Medical Center, while she was unemployed. While staying with her on weekends, her daughter would sometimes say she hated herself and wanted to die.

In 1999, Anderson, a resident of San Jose, decided to take her concerns to Santa Clara County Family Court. Like similar courts across the state, it is charged with adjudicating high-conflict divorces — managing the division of property, child support payments, and the often bitter process of establishing a plan for shared child-rearing. She urged the court to investigate whether her daughter was at risk of sexual molestation, and whether Rex's custody rights should be restricted as a result.

Family Court Judge James Stewart temporarily barred the children from seeing their father while the court looked into the abuse claims. But instead of seeking evidence as to whether molestation was taking place, he hired a Menlo Park–based psychologist, Leslie Packer, to evaluate both parents. Among Packer's tasks was to assess, in light of their psychological profiles, whether the accusations were likely to be true. After a series of interviews and personality tests, such as the Rorschach inkblot test, she delivered her opinion: Karen's fears for her daughter were unfounded.

"Karen's suspiciousness goes to the extent of paranoid thinking, particularly in regard to her husband's actions," Packer wrote in an evaluation delivered to the court. "There is a basis in her concerns with her husband's unusual sexual practices, but it appears that most of her speculations about her husband's possible sexualized attitudes toward their daughter are not based upon documented or reality-based evidence." Rex regained primary custody of his children.

Today, Rex Anderson is serving a 23-year sentence at Pleasant Valley State Prison in Coalinga. In 2003, he pleaded no contest to 25 counts of sex crimes against his daughter, including child molestation, sexual penetration of a child with a foreign object, and use of a minor to create pornography. When she turned 18, his daughter left his care and reported years of abuse to police in El Dorado County, where they were living. (SF Weekly is withholding her name as a victim of child sexual abuse.)

Seldom are a parent's allegations against an estranged former spouse rejected out of hand, only to be vindicated so completely. Yet observers say the Anderson case represents just one unfortunate outcome of systemic problems in the family courts' methods for investigating accusations of abuse.

Looking out for the children who find themselves in the middle of bitter divorces is the most important function of the state's family courts, and arguably one of the most significant duties of the judiciary as a whole. Yet evidence has mounted in recent years that it is a responsibility in which family court officials are sometimes failing dramatically. 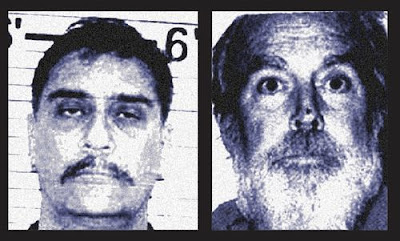 Rex Anderson (left) and Henry "Bud" Parson were both convicted of child molestation after family courts awarded them custody of their daughters.