PRESS RELEASE: For Immediate Release Contact Kathleen Russell: 415-388-9600 Wednesday, August 29, 2012 kr@centerforjudicialexcellence.orgTEEN MAKES VIDEO PLEA TO D.A. URGING PROSECUTION OF HIS ABUSERDamon Asks for Protective Order for his 16th BirthdayMonterey, CA Damon, a boy in hiding, has made a video requesting the Monterey County D.A. prosecute his sexually abusive father and grant him a Protective Order for his 16th birthday, so he will finally be safe and can return home. His video can be viewed at: Safe Kids International."It's been 10 years since I first reported that my father was sexually abusing me and the family court is still making me go back with him," said Damon, a victim of sexual abuse who is currently living in hiding to escape the abuse. "I'm using social media to spread the word and let everyone know what's happening. I'm hoping Monterey County DA, Dean Flippo, will give me a protective order for my birthday so that I'm able to go back to my home. I really miss my family and friends." Although Damon is from San Diego, he asserts that the San Diego District Attorney and Family Court judges have failed to do a proper investigation, have swept his abuse under the rug, and forced him to live with his father. Damon says that the court and his father have threatened to send him to a lock-down behavioral modification center to be coerced into recanting the abuse. So Damon ran away and went into hiding a year ago to protect himself. That is why, although Damon is from San Diego, he wants the case to be heard in Monterey County, where the abuse first occurred at his grandmother’s house.Along with social media, Damon has used a novel idea, the Evidentiary Abuse Affidavit (EAA). Born out of the Drew and Stacey Peterson case (currently at trial), the EAA was created by violence expert Susan Murphy Milano to insure that the victim’s accounts of assaults would not disappear if she did. It combines videotaping of the victim’s words attesting to the abuse coupled with creative witnessed and notarized legal documents that successfully satisfy legal hurdles often faced in these cases. Damon says he wants his EAA to be used in case he is sent to a lock-down facility, disappears, or is murdered. The EAA is a newly released iPad app making it easy for other teens in Damon’s situation to use. Former FBI director, Louis Freeh, when describing the Penn State cover up, said, “I want to remind everyone here, and those watching this press conference, of the need to report child sexual abuse to the authorities.” Damon has asked the public in his video to report his abuse to the D.A.Barry Nolan of the Boston Daily wrote, “In the Wake of Jerry Sandusky”, in which he observes that one of the recurring themes of the victims’ testimony was “Who would believe a kid?” He uses Damon’s case as an example of how sexual abuse reports are not taken seriously or investigated properly in family courts. Nolan says, “If enough of them come forward and enough of us start to listen, maybe one day one day when the question is asked — who would believe a kid? — the answer will be different.” Damon is hoping the answer will be different for him. District Attorney Dean Flippo: Office: (831) 755-5070 Email: flippodd@co.monterey.ca.us Richard Ducote, Consulting Attorney: Office: (412) 687-2020 Email: info@ducotelaw.comDamon’s videos to the public and EAA: Safe Kids International
Posted by Anne Grant at Wednesday, August 29, 2012

What Kentucky should teach Rhode Island's Attorney General and Judges 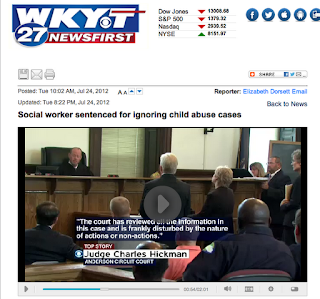 Click once to enlarge photo. Video is posted at
http://www.wkyt.com/news/headlines/Former-social-worker-sentenced-to-five-years-in-prison-163540676.html

On July 24, 2012, WKYT reported that Kentucky Judge Charles Hickman sentenced former social worker Geri Murphy to five years in prison after she admitted she had lied about sexual abuse cases involving children. She pleaded guilty to nine counts of falsifying documents. Though she had been living in Florida, Judge Hickman said she must serve her time in Kentucky. 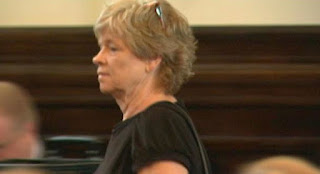 Prosecutors said that Murphy left children in homes where they were being sexually assaulted, that she never looked into the claims, and that she then lied to the state. Among the more disturbing cases listed in her indictment is the sexual abuse of a three-year-old by the biological father.

A state official testified that abuse continues because of Murphy's actions."The fact that these children could be left in the hands of possible abusers is particularly disturbing to the court," said Judge Hickman, who denied probation, saying it "would diminish the seriousness of these offenses."

I wonder whether Rhode Island's Attorney General Peter Kilmartin will ever prosecute anyone involved in the case reported at http://LittleHostages.blogspot.com where DCYF contracted with the Providence Center to have licensed social worker Haven Miles "reunite" two sisters with their biological father despite their terror of him, as Miles described in her own reports. The case illustrates why allegations of child sexual abuse and domestic violence--often felonies--do not belong in a civil courtroom where adversarial litigation fails to investigate the most obvious evidence.

The case of Jerry Sandusky at the University of Pennsylvania has brought new insights to the methods used by pedophiles. Last Sunday, Jenifer B. McKim, reported in the Boston Globe how diligent prosecutors search for evidence to use against those who target infants and toddlers because these children have no words to describe the crimes committed against them. Her article, "Photo emailed from Mass. man led to vast child pornography network," is posted online at
http://articles.boston.com/2012-07-29/business/32903262_1_milford-man-combat-child-photos-and-videos

How do young children disclose horrific sexual crimes to adults who would rather not understand what they are saying? In the Little Hostages case, social worker Haven Miles admitted that she had no way of knowing whether the sisters had been sexually abused by their father. But once DCYF hired Miles to reunite the girls with their father, she probably never saw their graphic artwork. The younger sister was three when she allegedly expressed her fear of her father's "sausage games" to a home child care owner, day care staff, hospital staff, and others. The girl drew her father like this, showing the multiple fingers and shaded, enlarged genitals that are common in drawings by genuine sex abuse victims: 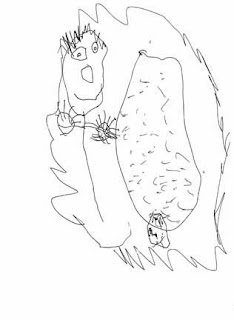 I saw her older sister's drawing of a huge erect penis in scorching red, which was so graphic I did not dare publish it on the Little Hostages blog. Both drawings would show how farfetched the father's claim was when he blamed their mother for putting those ideas into their daughters' heads, as if she were capable of demonstrating male erection and ejaculation in such a memorable manner. And yet, DCYF became complicit in the father's defense and delivered the girls to him using federal "reunification" funds. Whether DCYF even bothered to search for evidence may never be known, since Family Court Associate Justice John Mutter imposed an unconstitutional gag order and sealed both the divorce and DCYF files.

Since DCYF appears to be so readily manipulated by defense attorneys,  Rhode Island prosecutors must aspire to at least as high a standard as Kentucky's Office of Attorney General, and Family Court judges must begin to feel disturbed when apparent crimes against children are reduced to civil matters.
Posted by Anne Grant at Sunday, August 05, 2012