Don't Miss "No Way Out But One" 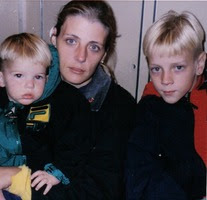 Don't miss this week's broadcast on the Documentary Channel about the true story of Holly Collins and her children, who were accepted by The Netherlands in 1994 as refugees from domestic violence in the United States:


In a Huffington Post interview, producer Garland Waller says she is "most surprised by . . . how many people just can't believe that family courts would give custody -- time and time again -- to abusers." That problem is far more widespread now than when Holly and her children escaped.

The goal of the Cummings Foundation’s initiative is to develop policy solutions at the federal level that will address the crisis in a meaningful way. To ensure that our nation’s top elected officials are made aware of the deep, systemic flaws that are harming more than 58,000 children per year in America’s family courts, the Foundation has just mailed a comprehensive report about the crisis to all members of Congress, every state’s Governor and Chief Justice, and thousands of law schools and forensic psychologists around the country. The report highlights our analysis of the U.S. family courts’ systemic flaws as presented by several esteemed lawyers, judges, psychologists and other experts who participated at the Cummings Foundation’s “Our Broken Family Court System” conference in Phoenix, Arizona last March.


See below for more information about the Cummings Foundation’s Broken Family Courts Initiative.