How are custody decisions evaluated? 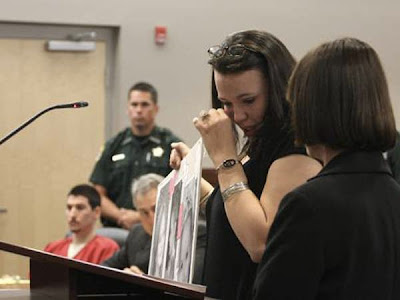 Elizabeth Brown wiped tears from her eyes Friday morning as she implored a judge to reconsider a plea deal that allows Matthew Roland to serve life in prison instead of receiving the death penalty for the beating death of their daughter, 4-year-old daughter Kristina Hepp, a year ago.

TRENTON, FL - Almost a year after 4-year-old Kristina Hepp was found lifeless inside her Waccasassa mobile home, her father pleaded no contest Friday morning in her death and was ordered to spend the rest of his life in prison.

Matthew Roland, 24, pleaded no contest to first-degree murder and aggravated child abuse. Circuit Judge Ysleta McDonald sentenced him to a mandatory sentence of life in prison without parole.

Kristina died April 27, 2009, inside the home where Roland had been living with her and his girlfriend, Chelci Folds, 20, of Mayo. Following an autopsy, the Medical Examiner's Office issued a determination that Kristina could have survived had she received medical care.

In court on Friday morning, Chief Assistant State Attorney Jeanne Singer told McDonald that if the case had gone to trial, witnesses would have testified that Roland had been "torturing or maliciously punishing, causing corneal and genital injuries and other injuries."

Singer also said there would have been testimony that the injuries found on Kristina during an autopsy "had been inflicted over time" and were the result of Roland using his hands and a belt to beat Kristina.

Absent from court was Folds, who had moved into Roland's home in February 2009, a day or two before he was awarded custody of Kristina.

Roland allegedly told deputies that while watching his daughter, he "got into it" with her that night and spanked her. Deputies also said Roland told them he hit her with a belt the afternoon of April 26.

Early the next morning, Roland woke Folds and told her Kristina was not breathing. Roland and Folds said they took the child to the living room, according to the Sheriff's Office, and put her down on the floor. Roland then tried to give her another nebulizer treatment and CPR before calling 911, the Sheriff's Office reported.

According to investigators, Folds spent at least 12 hours with Roland and the injured child without taking steps to care for her injuries.

Folds was charged with child neglect with great bodily harm. She received five years' probation as part of a plea deal in the case. Prosecutors identified Folds as the key witness against Roland.