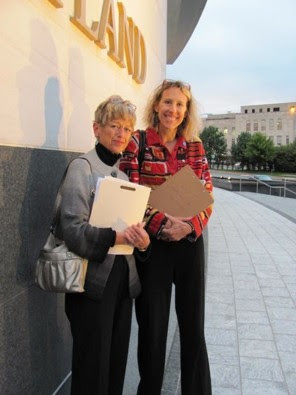 (Daniel Morse/WASHINGTON POST) - Judy Whiton, left, and Laurie Duker, right, run Court Watch Montgomery, which monitors restraining order hearings in Montgomery County. Five years ago, Laurie Duker took a job helping abused women get restraining orders in Montgomery County. What she saw stunned her: Some judges belittled people or didn’t give women the protection Duker thought they needed. The final straw, she said, was when a judge asked a man where he was from, heard “El Salvador” and said from the bench: “Figures.” So Duker quit and started a watchdog group. Over six months, she and 24 other volunteers observed 642 restraining-order hearings to critique the judges and the system. Read more here: http://www.washingtonpost.com/local/watchdog-group-critiques-montgomery-county-judges-who-issue-restraining-orders/2011/09/29/gIQATcBaGL_story.html
Posted by Anne Grant at Monday, October 03, 2011