Where do Fathers' Rights end? 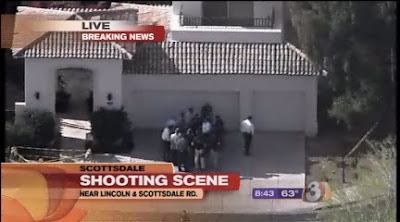 SCOTTSDALE, AZ -- A father reportedly shot his two children and then himself at a Scottsdale home Wednesday morning.

According to Scottsdale police Officer David Pubins, at approximately 8 a.m. 39-year-old Andre Leteve called 911 and said he had shot his child.

When police officers arrived at the home near Lincoln Drive and Scottsdale Road, they forced entry and found two small boys dead from apparent gunshot wounds. The kids ages are reportedly 5 years old and 15 months old.

Pubins said the father also shot himself. He was transported to a local hospital with non life-threatening injuries and is expected to survive.

3TV has learned Leteve was going through a divorce. Both he and his wife had completed parent education classes and were scheduled to appear in court on April 19.

The mother of the children reportedly had plans to take the kids out of state for a vacation and Leteve was attempting to stop those plans.
Posted by Anne Grant at Wednesday, March 31, 2010

Caged ... the evil dad
The sisters were raped 1,000 times and had nine babies by their brutal father - leading to a grovelling apology this week from social services who failed to help them.

Today The Sun can reveal he forced the terrified girls to keep quiet by warning them social workers would seize their babies if they spoke of their 25-year ordeal. One sister sobbed as she said:

We love our kids more than anything in the world. As I got older, he said if I told anyone my children would be taken away from me. I was too scared to tell anyone. Besides, I didn't think anyone would believe me.

When my mum asked me who the father of my first child was, I told her it was a local boy - but I knew the real father was my dad.

Fritzl ... Austrian incest beast
I lost count of how many times he raped me. He started touching me when I was about five. It was going on for years, but I didn't know my sister was also being abused until much later.

Pleaded
At one stage a few years ago I even paid him a few times from my benefits just to stop him. There was no way out.

No one was there for us and we were too terrified of him to tell anyone what was happening.

I pleaded for him to stop but he wouldn't. It took us years to build up the courage to report him. We were under his control.

There was no reaction or heart in him. He would just tell us to go to the bedroom.

Now we just want to get on with our lives. We don't want anyone to know who we are.

I don't know how I'll be able to tell the children who their father is. It's going to be very difficult.

The evil dad, a 57-year-old self-employed businessman, was given 25 life sentences for rape at Sheffield Crown Court 18 months ago and will serve a minimum of 14½ years.

The case had chilling echoes of Austrian incest beast Fritzl, who kept his daughter captive in a cellar for 24 years.

The two girls were made pregnant 18 times.

Seven of the children survived, two died the day they were born and the other pregnancies ended by miscarriage or abortion.

The pair are still traumatised and are receiving counselling. A damning independent report on the case revealed on Wednesday that social workers had suspected the girls' incest nightmare for 11 years.

But instead of taking action, they waited for the victims to speak out. Some social workers were too afraid of the violent, bullying father, the report said.

Senior Department of Health official Professor Pat Cantrill, who wrote the harrowing report, said that it had been wrong and unrealistic to simply expect the sisters to reveal their ordeals.

She added: "These children had been subjected to grave offences and emotional abuse.

"It would have prevented most people from taking the phenomenal step of disclosing what had been happening. Action should have been taken."

Bosses from two bungling councils flanked Prof Cantrill as she spelled out their failings.

Relatives insisted yesterday they DID try to stop the abuse but their tip-offs were not acted upon.

The rapist's cousin blasted: "Social services should have done something. Family members were reporting him but it never went anywhere. This could all have been stopped nearly two decades ago."

The cousin's wife said she told social services more than 20 years ago. It happened after she heard the dad order his daughter, who was getting dressed, to "come back to bed."

She said: "They said they would need corroboration. I kept ringing but I was always being put through to someone different and it never went anywhere."

The dad's mother-in-law - now dead - also reported him to police after catching him in bed with a daughter. And the sisters' brother made allegations but they were never properly investigated.

The horror began as far back as 1980. But the divorced father moved his family to new homes around Sheffield and Lincolnshire 67 times in a bid to escape notice of the authorities. At his trial, it was revealed several children born to his daughters were severely disabled.

But even after he realised genetic damage was being done, the sadistic thug "carried on impregnating his daughters".

He even threatened to kill the girls and their children.

All the family were frightened of him. When they heard his car pulling up outside, the children and their mother hid to avoid beatings. The girls were threatened with "a real hiding" if they refused to have sex.

One said he would hold her head next to the flames of a gas fire if she struggled.

At one stage the sisters were so desperate to halt the abuse they dosed their alcoholic father with huge amounts of whisky in the hope he would die.

One fuming relative blasted: "He's evil - but the social services are a disgrace. They should have done something."

By ALASTAIR TAYLOR
EXCLUSIVE
THE boss of a social services that failed to stop the abuse of the "British Fritzl" sisters now runs a consultancy firm - advising councils how to manage their care departments.

Matt Bukowski was director of social services at Lincolnshire County Council from 1996 to 2005.

Care workers suspected as far back as 1997 that the two sisters were giving birth to their rapist dad's children - but took no action to stop the abuse.

Its website boasts that the company "built its reputation by helping social care and health organisations make change happen".

Cambridge graduate Mr Bukowski's profile adds: "He is a whole systems thinker with extensive experience of enabling organisations to work more effectively to deliver improved outcomes for their customers."

A social services source said: "He was the man in charge of the department in Lincolnshire at that time. There were concerns about what was going on but nothing was done to stop it."

There is no suggestion Mr Bukowski - whose department got several one-star ratings from Government inspectors - was personally aware of the sisters' case.

But this week a damning report blasted errors by unnamed "professionals" in Lincolnshire and Sheffield.

Prof Pat Cantrill, a Department of Health official, said: "Nearly all the services involved with the family suspected or were aware of the suspicions of incest."

She said a "substantial picture" had emerged by 1997 and added: "Action should have been taken."

Mr Bukowski was not at his Lincoln home yesterday and was not responding to phone calls and messages.
Posted by Anne Grant at Friday, March 12, 2010