A 12-year-old sent his mother this note three years after he last saw her: 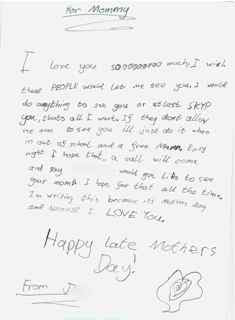 When soldiers are ordered to "take no prisoners," it means to annihilate their enemies. Physicians who vow to "do no harm" step onto a treacherous path when they sell their expertise to lawyers trained to take no prisoners in adversarial lawsuits.

For more than two decades, I have researched domestic abuse custody cases in Rhode Island Family Court, trying to understand how this publicly financed process crushes children and families. In many of these cases, lawyers, who are officers of the court, have manipulated clinicians. (Below I am naming only those lawyers and physicians specifically responsible to protect children.)

The girl's father had a documented history of aggression against his first two wives and their children. This child, the youngest, showed symptoms of sexual abuse. CPP Director Dr. Carole Jenny reported: "There is no doubt in my mind that some event happened because of the child's clear and consistent disclosure."

The father harassed those who tried to help his families: a security guard, social workers, therapists, teachers, pastors. He bullied a Providence Journal editor. He took aim at Kevin Aucoin, chief legal counsel at the Department of Children, Youth and Families (DCYF), for not responding quickly enough after the father appealed DCYF's findings against him. When he threatened to sue, Aucoin needed Dr. Jenny to revise her assessment.

She listed warning signs in the father's behavior, then minimized them in a summary of court documents. Her new "forensic review" freed the father to demand possession of his children. He held them for thirty months, until the eleventh Family Court judge to hear the case denounced his behavior in 2003 and sent the children home to their mother with damage that has not yet healed.

Second Case: In March 2006, attorney Lise Iwon began writing letters to the CPP about a case in which she purported to be a neutral guardian ad litem. She secured an astonishing report from Dr. Nancy S. Harper at CPP. Instead of medical information, Harper's report glibly summarized court documents Iwon had provided, repeating the conjecture, hearsay, and biased rhetoric in the father's defense strategy.

Harper's supervisor, Dr. Jenny, never saw or signed off on her CPP report before Iwon whisked it off to the judge who ordered DCYF to remove two young girls that day from their mother for a "psychiatric evaluation." Police arrived with a social worker to take them from their schools into "temporary" custody. The children remained in foster homes and a shelter at taxpayer expense for more than sixteen months before the state awarded the younger girl to the father she had accused of sexually assaulting her; the older girl went to yet another foster home.

Scores of neighbors, teachers, and others wrote letters attesting to the mother's superb parenting, but Iwon never interviewed them. Dr. Jenny told me the mother's behavior sounded "bizarre" but candidly admitted she herself might seem bizarre if she believed her children were in danger.

Third Case: A German father, head of a vast multinational corporate empire, retained several law firms in the U.S. and Germany to retrieve his two American sons after his estranged wife brought them here to her parents for one to have surgery in 2007.

The mother told me she had confronted her husband in Germany with evidence that he was sexually abusing their sons. She said she had walked in on this happening and found disturbing photos on a laptop computer her husband had given her. She related that her sons had pointed out a store where their father got hardcore pornography. They allegedly told her that he forced them to watch it and act it out.

The father hired a former U.S. official (at $700 an hour) as one of his lawyers, who reached out to Family Court Chief Judge Jeremiah S. Jeremiah, Jr., and paid the chief's assistant David Tassoni over $2,300 to help. The father's attorneys met alone in chambers with U.S. District Judge William E. Smith and intervened to end the involvement of Family Court, DCYF, and the FBI. They secured attorney Sharon O'Keefe, who had been assistant child advocate in Rhode Island, to serve as guardian ad litem.

O'Keefe contracted with Dr. Jenny to evaluate some of the father's photographs and a stack of German legal documents with apparent translations. O'Keefe's bill exceeded $13,000, including at least $2,000 to be paid directly to Dr. Jenny.

O'Keefe hardly talked with the boys, and Jenny never met them. Both concluded they saw no evidence the father was a pedophile. Judge Smith gave the boys and their American passports to their father, who took them back to Germany in April 2007.

Judge Smith ordered the father to give the boys plenty of time with their mother. But she has not been allowed to see or communicate with them since 2007. On Mothers Day 2010, one son wrote a plaintive note asking why "these people" would not at least let them Skype her.

It is troubling that Dr. Jenny never talked to the boys, who might have helped her interpret the photos. Nor did she demand an independent search of the hard drive by state police who are trained and equipped to examine electronic evidence of child pornography--and who do not accept private payment for their services.

In January, I wrote expressing these concerns and asked Dr. Jenny to improve CPP's protection of children by:

~Establishing ethical standards that forbid CPP staff to produce reports for private clients in litigation without a full investigation into the family's history;

~Making a complete inventory of past reports produced by CPP or its staff to see how these have been used in litigation and to examine the outcomes for children; and

~Providing CPP staff with training in domestic abuse, coercive control, and the symptoms of post-traumatic stress disorder (PTSD) that clinicians need to recognize in protective parents who may seem "bizarre" in their appropriate efforts to protect their children.

Clinicians must recognize the pitfalls when officers of the court reach out to them. Lawyers are hired to zealously represent their clients, no matter who gets hurt. Doctors trained to "do no harm" are easy prey for them; children suffer the consequences.

In order to protect children's identities, I am referring only to case numbers.

First Case: P92-4797 in Rhode Island Family Court; Carole Jenny, MD, signed the Child Safe Clinic #0629-23-38 report of January 14, 1997. After an extensive sexual abuse assessment by St. Mary's Home (April 16, 1997), DCYF sent a letter (April 18, 1997) to notify the father he had been "indicated." He appealed and a year later threatened to sue DCYF and its senior counsel Kevin Aucoin for failure to schedule a hearing. DCYF asked Dr. Jenny to review her records. Her report (July 29, 1998) was followed by a revised DCYF report (August 6, 1998), and Aucoin's motions (August 6, 1998, etc.) to launch an expedited trial. DCYF investigator Edward J. O'Donnell sent a letter (August 18, 1998) to the father stating that the findings against him "are hereby overturned . . . pursuant to . . . a forensic review of the investigation and all associated material conducted by Dr. Carole Jenny" (DCYF Administrative Appeal of SCR 425142 I/6).

Second Case: N04-0106 in Rhode Island Family Court and 1676-86-32 AC 000119896231 at Rhode Island Hospital. The court file, which is now sealed and presumably held at the Rhode Island Supreme Court, contains Lise Iwon's Motion (March 31, 2006) regarding her communications with Nancy Harper, and Iwon's Motion (April 5, 2006) asking to release clinical reports and court documents to Harper, whose report (March 21, 2006, signed April 5, 2006), shows that Harper already had those documents. I interviewed the mother and secured documents from her and the court file until Judge John Mutter imposed a gag order forbidding all parties to disclose anything further about the case and sealed both the divorce and DCYF files, on or about August 16, 2007.

Third Case: 07-46S in the U.S. District Court for Rhode Island, which holds transcripts, including the ex parte chamber conference of January 31, 2007, and court orders, including the decisive order of March 28, 2007; Jenny's report to O'Keefe (March 15, 2007); and the father's documentation of payments to Tassoni and others. The mother provided scores of documents, including the rental list from the German video store (October 2005), an initial DCYF report by Paul Ventura (January 31, 2007), O'Keefe's bills (March 12 and 28, 2007), hundreds of photographs from the laptop, and her son's letter (Mother's Day 2010).