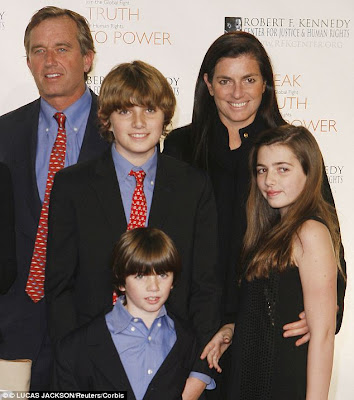 Mary Richardson Kennedy hung herself last week, reports Mail Online: "Court records show that as well as battling with debts and depression, she was also fighting a losing battle with her estranged husband as he relentlessly built a case against her in their custody battle.

"The son of the late Sen Robert F. Kennedy, he filed temporary restraining orders against Mary that a Westchester judge signed on March 28, April 19 and again last Friday, documents show.

"He also filed an order of protection last September and got another judge to hold her in contempt of court later that month, according to the Post."

At other times, the article reports, he praised her as "extraordinary," but he used the court to control her by filing multiple restraining orders. He tried to get full custody of the children by claiming she was unfit while he publicly replaced her with his actress girlfriend, Cheryl Hines.