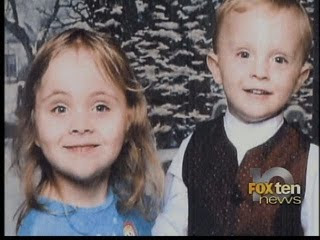 Paige Malone
MOBILE, Ala. - UPDATE: A search for the bodies of three-year-old Johnathan DeBlase and his four-year-old sister, Natalie continues today. This time at a second locaton in Mobile County according to Mobile Police Department.

Search teams began the second search in an area in the western part of the county. Stay with Fox 10 News. We have a crew on the scene and will keep you updated as information is released.

After hours of searching, police still have not found the bodies of three-year-old Johnathan DeBlase and his four-year-old sister Natalie.

Friday, their father, John DeBlase was arrested and told police the children are buried within a 100- mile radius of Mobile. Even after this news, their birth
mother and stepfather are trying to stay optimistic.

On November 19, police began searching for the missing children. Two weeks later, John DeBlase and his wife were arrested.

"My hope actually went up a notch with them having him," Corrine Heathcock, the children's mother told Fox 10 News earlier this week.

Not long after the interview, Heathcock and her husband Jonah Heathcock got some shocking news. DeBlase revealed to police that Jonathan and Natalie were dead.

"It was an eruption of tears. We just held each other as tightly as possible and cried like crazy. Called friends, called family," said Jonah Heathcock.

After hearing the news, Corrine Heathcock said, "Our hope is that they are found alive and well."

The search for the bodies began early Saturday morning and the Heathcock family was on edge all day.

"I'm just waiting for that phone call from a police officer to either call us or come up here and say we found them," said Jonah Heathcock.

Heathcock said they have been focusing on the good times they had with Jonathan and Natalie instead of looking toward a grim reality.

"He couldn't say hot dogs. He'd say dot dogs, so this morning I woke up with dot dogs on my mind."

Jonah and Corrine have not seen the children in over a year. They said DeBlase was granted custody because they could not provide the environment the children deserved.

"He called his son prince he called his daughter princess. At this point, I don't see where he could call them that anymore," said Heathcock.

Now, they wish they would have fought harder for the children and have a message for DeBlase.

Police narrowed the search down to the area just north of Vancleave, Mississippi. The search will continue early Sunday morning.

His wife, Heather Keaton, is being held in Louisville, Kentucky on two counts of willful abuse of a child. Police say she will be extradited to Mobile within a week.
Posted by Anne Grant at Sunday, December 05, 2010